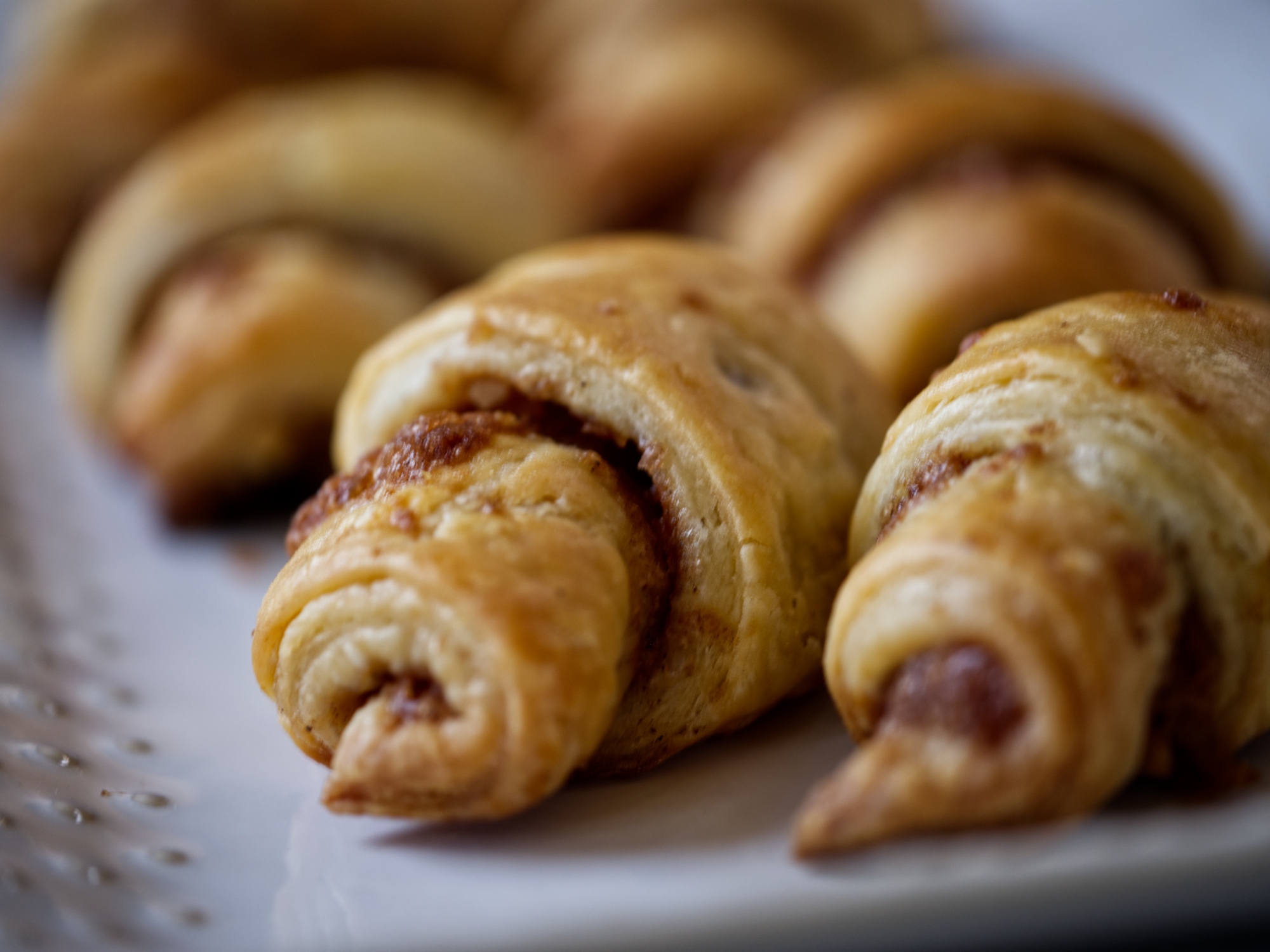 Let’s start by finding out how to say this. Since the recipe originally came from Polish Jews, unless you have lived in a big city or a foreign country, you will be unlikely to guess the correct pronunciation. American or Yiddish pronunciation? Sometimes it’s best just to point and let the clerk behind the counter say it for you. However you want to say it, they’re delicious, made with a simple dough that bakes up flaky and light, a perfect complement to the streusel filling.

This is one of those beautiful doughs that rolls out easily. Let it warm for 45-60 minutes after taking it from its refrigerator rest and roll it out to a 10″ circle. It doesn’t crack or tear, and if you use just a little flour it won’t stick. Cut the circle into 8 or 12 wedges. I have seen recipes for all kinds of fillings – chocolate, nuts, dried fruit – but here I’ll give a recipe for a cinnamon streusel with toasted walnuts. Toast walnuts by placing halves in a single layer on a cookie sheet or shallow pan. Bake at 350ºF for 12-15 minutes, till fragrant and beginning to brown. Watch carefully as they burn easily. Cool and chop. Extras can be frozen.

Simple to make, these are great for brunch, breakfast, or after-school snacks with milk.

Make the dough by stirring the salt into the flour in the bowl of a stand mixer. Add the butter, cream cheese, and sour cream or yogurt. Mix on low-medium speed until all of the flour is incorporated. Divide dough into 3 equal pieces. Pat each piece into a flattened disk about 4-5″ across. Place the disks into a container that has a cover, separating them with plastic wrap or waxed paper. Cover and refrigerate for at least 30 minutes or overnight. If they are refrigerated for several hours or overnight, let them warm up at room temperature for 45-60 minutes before rolling out.

While the dough is cooling, make the filling. Melt the butter in a microwavable bowl. Stir in the brown sugar till mixed. Stir cinnamon into the flour and then add it to the butter/sugar. Stir in nuts if desired. Set filling aside.

Working with one disk at a time, roll it out till it’s about 10″ across. Don’t fuss over a perfectly smooth edge – it will be rolled inside and won’t show. Use a pizza cutter to cut the circle into either 8 or 12 wedges. Sprinkle filling over the entire circle. Pull wedges out individually and roll them up, starting at the wide edge and rolling tightly. Place them with the pointed edge down on a parchment-lined cookie sheet, about 1-2″ apart. They won’t spread. Brush tops with milk or cream. Bake for 25-30 minutes.

This site uses Akismet to reduce spam. Learn how your comment data is processed.